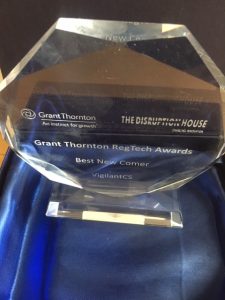 VigilantCS has won the Best Newcomer award in the first Grant Thornton U.K. RegTech Awards. It was also nominated for the Most Innovative RegTech Solution Award.

Winners in six categories were announced at Grant Thornton’s Finsbury Square, London office October 2. VigilantCS CEO and Co-founder Rob Kirwin accepted the award on behalf of the company and made a presentation at the Regtech Summit on Oct. 3.

The RegTech Awards “celebrate best-in-class technologies and solutions from across the regulatory technology (RegTech) ecosystem.” They are based on a new RegTech Index developed with The Disruption House, a research and data driven modelling firm that focuses on “early stage and high growth technology providers.” On informing VigilantCS of its win, the email from Grant Thornton U.K. stated that the accolade, “reflects the strength of your business and the innovative technologies you offer to the market.”

“Receiving this acknowledgement is a special honour and the second time VigilantCS has received international recognition,” says Kirwin. “We thank Grant Thornton U.K. and The Disruption House and gratefully add this tribute to a growing list that affirms VigilantCS is making strides in the RegTech and FinTech marketplaces.”

From the RegTech Summit, several key observations emerge, adds Kirwin. RegTech firms need to concentrate more on building platforms and supporting integration rather than focusing on specific applications. Regulation is a common requirement in all jurisdictions, so working towards common utility structures save costs; it also improves responsiveness to change and data quality. And, finally, RegTech platforms should be leveraged to meet strategic business goals.

“Our proprietary regulatory compliance solutions align with these priorities,” says Kirwin. “They benefit all key constituencies responsible for ensuring staff regulatory requirements are met and transform a necessary function into a strategic advantage.”

Grant Thornton U.K. LLP is led by 190 partners and has a team of more than 4,500. It is part of the Grant Thornton network of independent assurance, tax and advisory firms in over 135 countries. The firm has been operating for more than 100 years. grantthorntonuk.

Founded by compliance professionals, VigilantCS is an innovative producer of intelligent cloud-based platforms for cost-effectively managing and monitoring conduct risk and staff-level compliance. In 2017, VigilantCS was one of only three Canadian companies to be named to the RegTech 100 list by FinTech Global. In July 2018, VigilantCS was named a Top 25 Up and Coming ICT Company by the Branham Group Inc. for demonstrating innovation and promise. vigilantcs.com.

This website uses cookies to improve your experience while you navigate through the website. Out of these cookies, the cookies that are categorized as necessary are stored on your browser as they are essential for the working of basic functionalities of the website. We also use third-party cookies that help us analyze and understand how you use this website. These cookies will be stored in your browser only with your consent. You also have the option to opt-out of these cookies. But opting out of some of these cookies may have an effect on your browsing experience.
Necessary Always Enabled
Necessary cookies are absolutely essential for the website to function properly. This category only includes cookies that ensures basic functionalities and security features of the website. These cookies do not store any personal information.
Non-necessary
Any cookies that may not be particularly necessary for the website to function and is used specifically to collect user personal data via analytics, ads, other embedded contents are termed as non-necessary cookies. It is mandatory to procure user consent prior to running these cookies on your website.
SAVE & ACCEPT